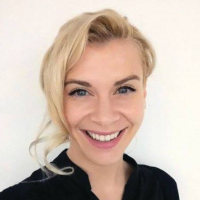 Lecturer in Theatre Studies at University of Gdańsk. She completed her BA (Hons), MA and PhD studies in the United Kingdom. Her portfolio can be accessed at www.dobkowska.com.

April 2017 to September 2019  Lecturer at University of the Ryukyus, Japan (Part-Time)

Active member of the International Federation for Theatre Research (IFTR)

2013  Research Grant from Royal Holloway University of London: Recipient of funding to present paper entitled ‘Performative Absence as Exchange of Signifiers’ at TaPRA Conference in Glasgow, the United Kingdom.

2009  Highest Grades Award from University of Wolverhampton in the United Kingdom: Recipient of Highest Classification Award in Drama Department in the academic year 2009.

2005 – 2006  Project Grant from the European Commission, Brussels: Recipient of a grant from Youth in Action Programme awarded for a performance art project.

Practice as Research and Art Projects

2019  Ryūmya and Yui – Drama Production. The playscript has been researched and written by Dr Szymon Gredżuk, and applied to the text adaptation by Alistair McCallum of the original work – Romeo and Juliet by William Shakespeare. This play was staged by the Drama Production class. Meio University, Japan

2018  and 2019  Poetry Performance – In January 2018 and January 2019, through butō methods, students developed their interpretation of contemporary poetry. Meio University, Japan

2017  British Theatre – This project consisted of ten workshops, where students developed their own original theatre script across genres of drama and physical theatre. University of the Ryukyus, Japan

1. I am interested in the concepts of absence in theatre as well as visual representation of language in design.

2. In parallel to the first project, I continuously develop my understanding of Butō, Kabuki, Nō, and Kumiodori theatre.

In this independent research project I worked together with Dr Paul Johnson as a co-editor. The book was initiated following a conference on Jasmin Vardimon Company. As a designer and co-editor, I look into innovative ways of displaying non-chronological order of events in performance through the use of materials with varied opacity, such as tracing paper. This material allows reading through multiple layers of paper, as well as dividing one line into multiple physical pages. I look at the process of turning page as an element of book performance. Details in design present ideas, such as merging text and performance is presented on the front page through stage directions written in the beams of light (detail visible on a printed copy).

Dobkowska, Sylwia and Szymon Gredżuk. ‘Kumiodori – 300 Anniversary of Theatre from Okinawa. Connections.’  Between the word, the sound and the image: A Centenary of Polish-Japanese Diplomatic Relations. Adam Mickiewicz University in Poznań, Poland. 4-5 December 2019. (5 December 2019)

Dobkowska, Sylwia. Performative Absence as Exchange of Signifiers. Theatre and Performance Research Association (TaPRA). University of Glasgow and the Royal Conservatoire of Scotland, Glasgow in the United Kingdom. 4-6 September 2013.