The overarching principle and objective, recorded in the mission and vision of the school, is a

Professor Jerzy Piotr Gwizdala, Rector of the University of Gdańsk stated in his opening speech that the university feels obligated by naming the school in honor of the late Mayor of Gdańsk, Mr. Paweł Adamowicz. It is also a way of fostering the values he cherished: the idea of social service, patriotism and the love for our Little Homeland, the Pomorskie Region, of which we are an integral part:

-On the eve of the first anniversary of Mr. Paweł Adamowicz’s death, fulfilling educational mission, our high school adopts His name with great honor and privilege. He was a skilled Mayor, a good Polish citizen, but most of all a great citizen of Gdańsk. I still cannot come terms with having to use past tense when speaking of our Paweł Adamowicz. The disturbed order of things is difficult to be accepted. I am strongly convinced, that our school will be the testimonial in his honor and the idea he originated and implemented will find its completion here – said Rector of the University of Gdańsk.

Dr hab. Magdalena Adamowicz, Member of the European Parliament and the lecturer at the University of Gdańsk emphasized that making the late Mayor Paweł Adamowicz the high school’s patron is the utmost tribute to her tragically deceased husband: Paweł would not want Bronze monuments, he believed in education, he believed it was the key to create open, tolerant and smart society. She recalled the late Mayor’s merits for the modern education and announced establishing the research institute in his name.

-It is a joyous day but shadowed by the tragedy. You are the hope to make the name of Mayor Paweł Adamowicz timeless – Mayor Aleksandra Dulkiewicz addressed the students. She stated that, Mayor Adamowicz, by all means,  deserves to be the honorary patron of the school, because he highly respected the subject matter experts and people of grand ideas, he believed in the development of men through reading and had courage to introduce changes even during difficult times. Mayor Dulkiewicz presented Principal Waldemar Kotowski with the Paweł Adamowicz portrait, based on the photo taken by Renata Dąbrowska.

The Principal of the Gdańsk University High School, Mr. Waldemar Kotowski reminded everybody how organizationally challenging it was to establish the school and emphasized that the brilliant teachers had been brought in.

The late Mayor’s brother, Piotr also took the stage and shared anecdotes from their university days.

The congratulatory letter, on behalf of The Pomeranian Education Superintended, was presented by Ms. Beata Wolak.

The official school flag being granted by Vice-Rector for Student Affairs and Education, Professor Arnold Kłonczyński and student oaths were the highlights of the ceremony.

The ceremony was hosted by the students themselves, who also prepared the artistic performance in memory of the school patron. Maciej Czernikowski, the Chairman of the Student Government spoke on behalf of his fellow students.

The use of the University of Gdańsk infrastructure, together with the academic staff’s potential makes it the one of a kind education institution. The Gdańsk University High School is located at the Faculty of Social Sciences of the University of Gdańsk, the majority of classes are also held there. Laboratories in Biology, Physics, Chemistry and Informatics take place at the appropriate university faculties. The High School is a public secondary school with branches carrying oud three-year and four-year education cycles. Mr. Waldemar Kotowski is currently the Principal of the institution. 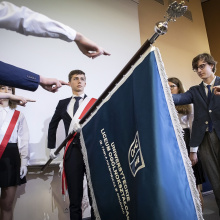 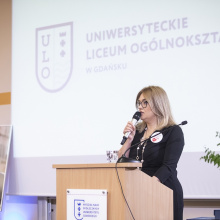 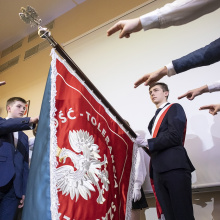 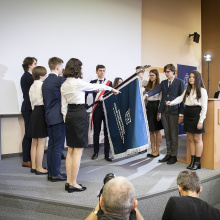 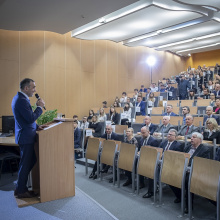 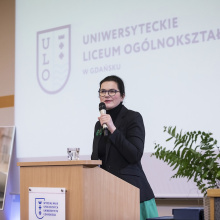 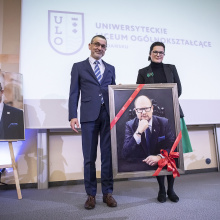 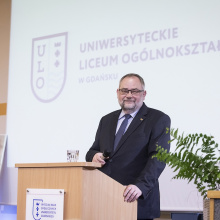 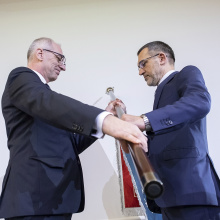 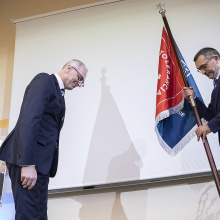 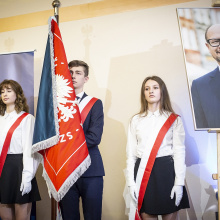 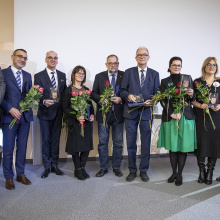 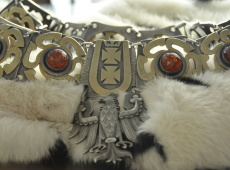 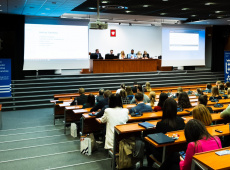 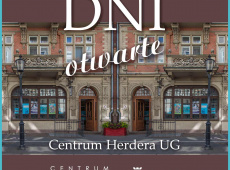 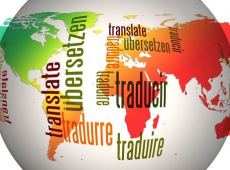 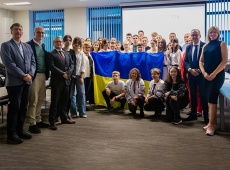